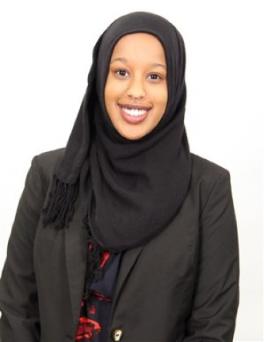 Nima Dahir, a senior honors student majoring in economics and mathematics, has been accumulating honors and awards for some time now. The daughter of Somali immigrants, when Dahir was a senior at Bradley High School in Hilliard, Ohio, she was the only student in the Hilliard City School District to be named a semifinalist in the 2012 National Achievement Scholarship program. Her favorite subjects in high school were math and science.
Considered an “academically exceptional student,” Dahir was a awarded a Morrill Scholarship by Ohio State to pursue her dream of combining economics and math to shape economic and public policy to improve economic development.
“Economics and social science is interesting to me because it delves into interactions with people,” says Dahir. “In the Department of Economics, I’ve had the opportunity to have life changing conversations with faculty who encourage me to think about what my future goals are and why this is a field I can flourish in.”
Over the last several years, Dahir has been developing an independent research project in experimental economics under the guidance of Katherine Coffman, assistant professor, economics, who is advising her on the relationship between optimism and willingness to borrow microfinance loans.
“I have known Nima since the spring of 2013,” said Coffman. “She stands out as an undergraduate in that her interest in research stems largely from her deeply-rooted desire to find ways to improve economic and social conditions in developing communities.”
An honors student, Dahir also serves as a research assistant to Economics Professor Bruce Weinberg.
“I met Nima when she took my small, highly-interactive, upper-level undergraduate research class in fall 2014,” said Weinberg. “Even in this exceptional group, she distinguished herself.”
According to Weinberg, Dahir is driven by a compelling interest in using her skills to address pressing social problems. “She has all the makings of a dynamic and effective teacher and she is preparing herself to be able to impact policy as well as the scholarly literature through her service work and leadership training.”
In April, Dahir was named a 2015 Beinecke Scholar. The Beinecke Scholarship is awarded to twenty students nationwide who have demonstrated superior standards of intellectual ability, scholastic achievement and personal promise. The award provides $34,000 to support graduate studies. Dahir is the fifth Ohio State student to be named a Beinecke Scholar.
This past summer, Dahir completed an internship at the Federal Reserve Bank as a research assistant in the Microeconomic Research function at the bank. While there, she worked closely with economists to conduct research on the behavior and interaction of households, firms and government.
Next year, Dahir will be returning to the Federal Reserve as a research analyst. In that position, she will continue conducting research to contribute to the Bank's supervisory and policy missions.
Outside the classroom, Dahir is a Buckeye Leadership Fellow, a volunteer and board member for the Broad Street Food Pantry and the past editor of the Journal of Politics and International Affairs. She has also studied abroad in Morocco and volunteered teaching English to young girls in Somalia.
Share on Social Media